Sales prospecting, the way most salespeople do it, damages their self-esteem. The psychological cost is clear, immediate and certain. The pain outweighs the potential, uncertain, long-term benefit of this dial. 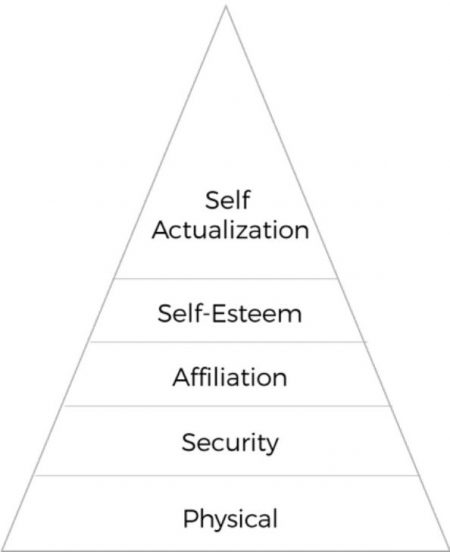 The best explanation of human motivation is Maslow’s Hierarchy of Needs. Maslow said humans need certain things – food, security, shelter, social interaction, self-esteem. Motivation comes from need and we all satisfy the needs in order, starting at the bottom of the figure below.

If you refer to Maslow’s Hierarchy of Needs, the reason sales prospecting is a problem becomes clear.

If my needs are met below the “Self-Esteem” level, I won’t do anything that risks my self-esteem.

You can use Maslow’s Hierarchy of Needs to understand and harness the power of peer pressure and motivate more sales prospecting.

We have to feel some challenge or threat at a lower level to take a risk at a higher level.

For example, in order to drive mastery of the software sales methodology, I hold weekly game film reviews. Salespeople record their sales calls during the week and I review them and provide notes. Then the team meets for an hour weekly to review selected game film. This process drives adoption of the sales process because:

Any desired behavior will be improved if you find a way to monitor it. Managers resist the idea of monitoring behavior and often call it micro-managing.  However, external accountability is a success habit.  Top performers do it of their own accord.

A top Cisco salesperson told me that consistent sales prospecting was the key to his success. He also said he hated to do it. One trick he used was to schedule prospecting time on his calendar – not as a ‘to do’ but as an appointment. He also arranged to have a partner come in and call with him. He said the buddy system made it more certain that he would make calls. Plus, the partner made dials he wouldn’t have made, thus doubling dials into his territory. 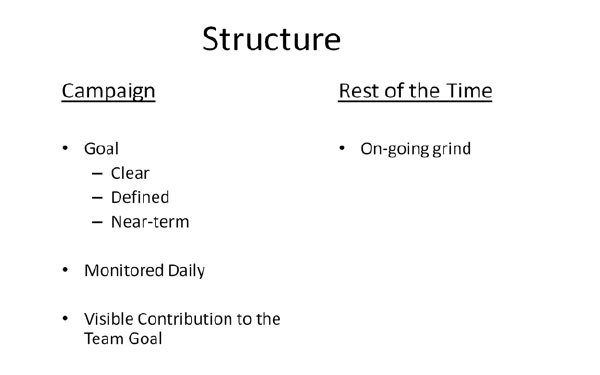 Penny, who had a marketing background was put in charge of an inside sales team. She asked me to help her set up and manage the team. In the process, she remarked, “These college kids! They do great when we are doing specific campaigns. Calls are up then. Other times calls are down.”

Her lesson was that most of them needed the specific, short-term goals, ongoing monitoring and frequent feedback that occurred during a specific campaign – and they needed it all the time. The chart below summarizes the comparison.

Specific short-term campaigns, new product launches, or experiments all provide a premise for monitoring and measuring.