Any connoisseur of great sports movies (and anyone with a pulse who saw the movie Miracle about the gold medal men’s hockey game between the USA and the USSR in the 1980 Winter Olympics at Lake Placid) knows for sure that morale matters. In the movie, coach Herb Brooks (played by Kurt Russell) delivers perhaps the greatest pregame locker room speech of all time. It worked.

A very large part of triumph is in the mind. That’s why the “motivational speaker” circuit is so crowded and yet so lucrative. And it’s why the morale of a sales team cannot be safely ignored, underestimated, or left to chance. My own experience (and experimentation) suggests that morale may be the single most critical success factor in sales. If morale suffers, everything else (beliefs, activity, ability, and style) suffers in its wake. Once negative thinking is allowed to creep in and gain a foothold, dejection and defeat follow with it.

I’ve often heard sales managers grumble that attitude is uncoachable. That’s one of the key differences between a leader and a manager: A leader knows better. Leaders understand that you are always impacting morale; either positively or negatively; either on purpose or by accident.

When the Battle of Britain appeared all but lost, British Prime Minister Winston Churchill famously said, “if the British Empire and its Commonwealth last for a thousand years, men will still say, ‘This was their finest hour.’” At the time when the people were at their lowest, he didn’t shout for them to fight harder or shoot straighter. Instead he reminded them of their noble cause and their national honor. He gave his people and his troops the uplift they so desperately needed. It worked. 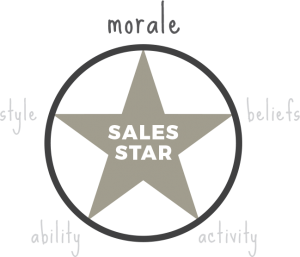 I humbly suggest that if you don’t have a conscious plan to positively impact the morale of your team, you may inadvertently do more harm than good and become a spiritual vampire. It is easier to turn someone off than to turn someone on, to snuff out a fire than to light a fire.

Most researchers agree that achieving peak morale (in any human endeavor) depends on maintaining the right balance between positive to negative feedback. The magic ratio is approximately 5:1. In other words, a great coach consciously provides about five positive, uplifting remarks to balance out one negative, critical remark. (Note that criticism is sometimes good and necessary, but it needs to be balanced by honest praise, and plenty of it.)

Note: If in the process of squeezing more performance out of my team I instill a sense of desperation, I negatively impact their morale and harm their ability to perform.

“Battles are lost more as a result of discouragement than casualties.”