How Your Beliefs Impact Sales Success

Most of us are familiar with the old saying: “I’ll believe it when I see it.” Most of us have probably said it ourselves. And meant it. Unfortunately, it isn’t mostly true. It may actually be more accurate to say, “I’ll see it when I believe it.” What we believe matters.

The fact is that in the matter of individual experience perception really is reality. Any illusionist worth his salt can tell you that we see what we expect to see just as often as we see what’s actually there.

Advances in brain science and neuroplasticity (and in a whole range of fields that touch on beliefs) are astonishing. This is not the right place and I am not the right guide to explore these things. What is important for our consideration, however, is that just because I believe something does not make it so, as a matter of objective reality. But it does massively impact my subjective experience. What I believe controls my behavior. And much of what I believe is neither true nor helpful. Thankfully, I can change my beliefs. But it takes hard work. And good guidance.

Your sales teams’ sales skills are driven largely by their current mental map. That is to say, their actions are either supported or undermined by their beliefs. Beliefs can be self-fulfilling prophecies. If, for example, a salesperson firmly believes he has to discount to win, he will certainly yield to the slightest price pressure.

If you want your salespeople to act differently, you will need to help them identify incorrect, disabling beliefs and revise their mental map. It’s not easy. Beliefs are often unconscious, hardwired perceptions of reality. Reprogramming is particularly difficult because our perceptions of reality are self-reinforcing. It goes something like this: 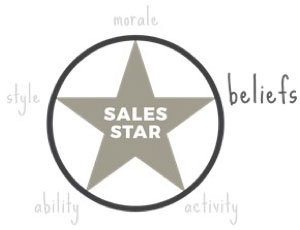 Your beliefs are NOT who you are. They are who you learned to be. Create your own reality.

“The difficulty lies, not in the new ideas, but in escaping from the old ones …”

Note: Plan to positively impact your sales teams’ beliefs. And remember, nothing persuades like success. Have your team share successes. Sales people (like everyone else) are more influenced by their successful peers than by the boss.