In 2010, Washington Redskins’ two-time All-Pro defensive linebacker Albert Haynesworth was suspended without pay because according to head coach Mike Shanahan he would simply not cooperate with the team’s coaching staff.

In short, he had the skill set and temperament to excel in one set of conditions, but not in a different set of seemingly similar conditions. It happens all the time.

It is not uncommon for entrepreneurs (who tend to be impatient by nature) and even some senior sales leaders to eschew the hard work of building and developing a sales team and instead try to take a shortcut by just hiring senior salespeople. Like many shortcuts in life, it can be a costly error.

The rationale seems plausible on the face of it: If you hire the right set of seasoned sales talent you can just set them loose to plunder the vast pool of ready buyers who’ll be mere putty in their experienced hands. And you can avoid all of the drudgery, expense, and occasional heartache of training and coaching a fresh crop of recruits. What could possibly go wrong?

There are some serious flaws in this kind of magical thinking. The first of course, is it begs the obvious question: If your salespeople are self-sufficient and need neither coaching nor training, why do you need a sales leader? The second is the simple fact that not all sales success is equal. A person can be extremely successful in one industry or environment working in a particular context or set of circumstances, and then fall flat on his face somewhere else when faced with a different set of challenges. While no-one would think of football players as interchangeable, some of us make the mistake of thinking of “salesperson” as a single, monolithic role. It is not. 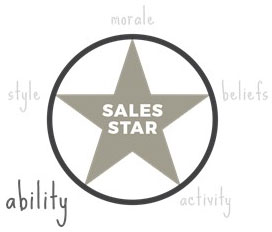 There are no shortcuts in the formation of a sales team. Salespeople, like professional football players, must adapt to the system within which they are working. If the skills they bring to the table don’t transfer to a particular job, they must acquire the needed skills through training and coaching.

Ability is based on knowledge and skills and for salespeople it includes:

Note: Salespeople are motivated to improve, but do not always know how. If you give specific, actionable, and credible advice, they will act on it. When they try new sales skills and succeed, they are motivated by that success. Sales is a hard profession. Success is the ultimate sales motivator. Motivate your salespeople by helping them succeed.

“My job as a coach is to make people do what they don’t want to do, so they can be what they want to be.”